Reflex Hammers: History, Current Use and How to Buy 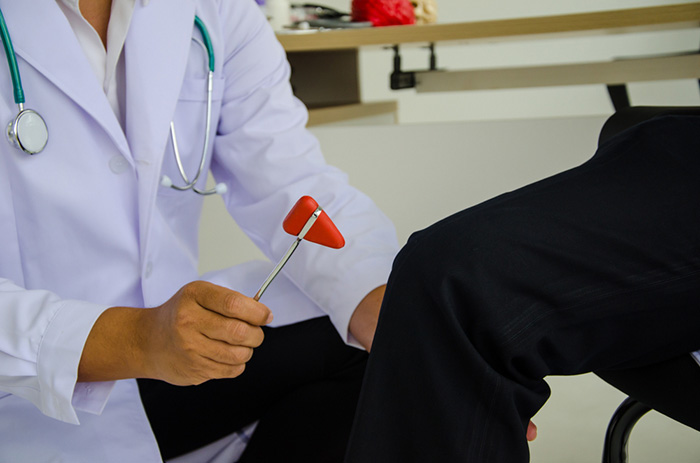 Reflexes and Why They Are Important

A reflex is an unconscious, involuntary, fast response to a stimulus. We perform many reflexes every single day, including blinking at sudden light, pulling our hand away from a hot stove and jumping at a loud noise.

Our reflexes are so fast because they don’t have to be routed through the brain. Instead, your receptor neurons sense a stimulus (heat, light, noise, etc.) and send that information along to a sensory neuron. The sensory neuron passes it along to a relay neuron in your spinal cord. The relay neuron connects to a motor neuron, which tells the effector to produce a response (for example, stimulating a muscle in your arm to pull your hand away from a hot pot).

There are many different kind of reflexes, and reflex hammers are specifically used to activate deep tendon reflexes, which are associated with muscle stretches. The main reflexes tested are the biceps and brachioradialis, the triceps, the patellar and the ankle. These reflexes are used to test the health of both the central and peripheral nervous system and they can serve as a warning sign of neuromuscular disease. Doctors look for both overactive and underactive reflexes, as either side of the spectrum can be an indication of a health problem.

History of the Reflex Hammer

The history of the reflex hammer begins in 1875 with the discovery of deep tendon reflexes by two physicians–Wilhelm Heinrich Erb and Karl Friedrich Otto Westphal. They both suggested that this reflex could be activated by striking the tendon. Erb went further, recommending that a percussion hammer be used to elicit the reflex response.

Percussion hammers were already in use at the time, being used to percuss the chest (i.e., to gently tap it in order to diagnose it). Thoracic percussion of the chest had been invented more than a hundred years earlier, in 1761, by Leopold Auenbrugger. Believe it or not, he was inspired by the tapping technique his father used to test the level of wine in the barrels in the basement of his hotel. Auenbrugger realized this same mechanism could be used to assess the texture and density of the organs in the chest. While his method was ignored at first, it eventually caught on, and doctors began exploring other applications of percussion besides examining the chest, including testing tendon reflexes.

However, chest percussion hammers were not well-suited to testing tendon reflexes. John Madison Taylor, namesake of the popular Taylor reflex hammer, developed the first hammer design specifically for reflexes in 1888 while working at Philadelphia Orthopedic Hospital and Infirmary for Nervous Disease. His original head design featured a cone flattened on the side, which evolved into the distinct triangle shape we still use today.

Several years later, Williams Christopher Krauss designed the two-headed Krauss mallet and exhibited it at a meeting of the American Neurological Society in 1894. Ernst Trömner further modified this design, tapering the metal handle down to a point that could be used to test cutaneous and vascular reflexes. Further variations followed, such as Joseph Babinski’s hammer in 1912 and the Queen Square hammer in 1925.

Despite many advances in technology in the past 100 years, reflex hammer designs remain largely unchanged from the first wave of innovations so many decades ago. The reflex hammer remains a hallmark of any diagnostic kit that a doctor, nurse or other medical professional might use. Right now, the reflex hammer shows no signs of going anywhere—so in the following sections, we’ll break down the main types of reflex hammers and how to use them.

While they all do basically the same thing, there are five main types of reflex hammers on the market. Here’s what you need to know about their similarities and differences:

Babinski: The Babinski reflex hammer is very similar to the Queen Square hammer in appearance, except that it features a metal handle, which is also often detachable. The handle may also telescope for storage purposes. It’s named after its inventor, French neurologist Joseph Babinski.

Berliner: The Berliner reflex hammer features a very unique shape. The rubber semi-circle disk is attached to a metal handle bent at a 90-degree angle, which makes the reflex hammer look a bit like a throwing axe.

How to Use a Reflex Hammer

However, there are slight differences depending on which deep tendon reflex you are testing. To test both the Achilles tendon and the patellar tendon, have the patient dangle their leg over the edge of the exam table. Strike the Achilles tendons on the back of the heel while gently supporting the bottom of the foot so it doesn’t fly up and accidentally hit you in the face. When testing the patellar tendon, stand to the side of the patient–again, so you won’t get hit–and strike below the knee cap.

To test the biceps tendon, let the arm rest in the patient’s lap or gently support their arm in yours. Place your fingers over the tendon and gently strike them (this keeps the force of the hammer from dissipating into the soft tissue around the arm and ensures that it actually activates the reflex). To test the Brachioradialis in the forearm, let the lower arm rest gently in the patient’s lap. Strike approximately 10 centimeters above the wrist. This should make the arm fly out at the elbow and the palm turn upward.

Last, but not least, to test the triceps tendon, have the patient put their hand loosely on their hip or pull out their arm at a right angle and support it at the elbow. Strike above the elbow joint, which should cause the lower arm to extend and swing away from their body. If the patient is holding their hip, the arm won’t move but the muscle will visibly contract.

While choosing a reflex hammer may seem like a simple, straightforward decision, once you start searching, you’ll realize just how many options there are on the market. To help you make a decision, we’ve highlighted the four main brands of reflex hammer below.

MDF Instruments makes not only reflex hammers but also stethoscopes and sphygmomanometers. Since 1971, this American company has been manufacturing high quality medical instruments and its products are used by many well-known NGOs and world health organizations, among others. While not cheap (at least relative to other reflex hammers on the market), MDF instruments are well-made and very durable, and come with a lifetime warranty to back up their claims and price point. If you’re searching for a premium reflex hammer that will look great and last you for years, MDF Instruments is the way to go.

If you’re looking for a more cost-effective model, Prestige Medical is an excellent choice. Its mid-tier reflex hammers unite quality with cost efficiency and will serve you well for several years. Certain products, such as the Prestige Medical Taylor reflex hammer, also offer fun colors options (you can choose from pink, orange, teal, blue, purple and, of course, the classic black). If the color options aren’t enough for you, you can also choose to personalize the handle so your reflex hammer never gets mixed up with anyone else’s.

If you can’t decide on a single design of reflex hammer, look no further than this neurological hammer set by American Diagnostic Corporation. It includes four different reflex hammers—the Taylor hammer, the Buck hammer, the Babinski hammer and the Queen’s Square Hammer—plus the Wartenberg Neurological Pinwheel, which tests nerve reactions as it is rolled across the skin. The hammers are made from chrome or stainless steel metal for durability, and the heads are latex-free so they’re suitable to use if you have an allergy. All the products come with a one-year warranty for peace of mind.

If you’re looking for quality on a budget, we suggest our own allheart reflex hammers. We offer two different designs of the Taylor reflex hammer in several colors, as well as the Babinski and the Buck hammers. The flat handles of the Taylor hammers can also be personalized for a few dollars more. Our reflex hammers are perfect for medical students or anyone else just starting out who’s looking to complete their diagnostic kit while keeping costs reasonable.

If you choose well, you might use your new reflex hammer for years to come. Keep this guide in mind as you shop, and if you need help with any part of your order, our customer service team is always happy to assist you. 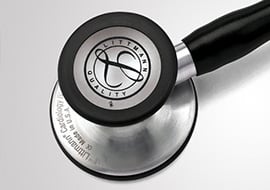 3M Littmann released the Cardiology IV, and it’s setting the new standard in stethoscopes with improved performance, durability and design. Discover four reasons why the Littmann Cardiology IV Stethoscope is the perfect choice for your next stethoscope.

This independently-owned, woman-run brand makes some of the most comfortable and fashionable scrubs we’ve ever tried on. Discover seven reasons why nurses love koi scrubs, from its many lines to its fun accessories. 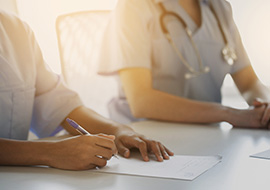 Discover the best stethoscopes for nursing school for every price point, from our budget pick to a worthwhile splurge that will last you for years.