How to Become a Phlebotomist

What is a phlebotomist?

A phlebotomist draws blood and prepares it for medical procedures such as laboratory testing, transfusion and donation. They may collect blood via several methods, including venipuncture, finger pricks and heel pricks. It’s important to note that not everyone who performs blood draws is automatically a phlebotomist. For example, nurses often perform blood draws in their line of work, but it’s only one task among many job duties. Phlebotomists are distinguished by the concentrated scope of their job: They only perform blood draws and related activities, not other clinical tasks.

What does a phlebotomist do?

Phlebotomists perform a variety of tasks related to drawing blood. In a typical day, they might:

Making sure that blood samples don’t degrade or become contaminated is top priority for the phlebotomist, as this can adversely affect the results of any test performed on the sample.

How do I become a phlebotomist?

Nearly all phlebotomists enter the profession through a specialized phlebotomy program. In order to be accepted, you must have a high school diploma or the equivalent (i.e., have earned your GED). These programs take one year or less to complete and lead to a certificate. Topics covered include anatomy, physiology and medical terminology. The format combines both classroom time and laboratory work for hands-on experience. In a few cases, some phlebotomists may be hired directly and receive their training on-the-job, but this is rare because most employers prefer applicants who already have certifications (see below).

How do I become a certified phlebotomist?

Many employers prefer to hire candidates who are already certified in phlebotomy, as this speaks to their professional skills. Some organizations that offer Phlebotomy Technician certifications include The National Center for Competency Testing (NCCT), National Healthcareer Association (NHA), the American Society for Clinical Pathology (ASCP), the National Phlebotomy Association and the American Medical Technologists (AMT). If you complete a phlebotomy program, you will likely earn a certification from one of these organizations as part of the program. Certifications usually involve written exams and may also include an additional hands-on component (such as drawing blood). California, Louisiana, Nevada and Washington require their phlebotomists to be certified before beginning work. 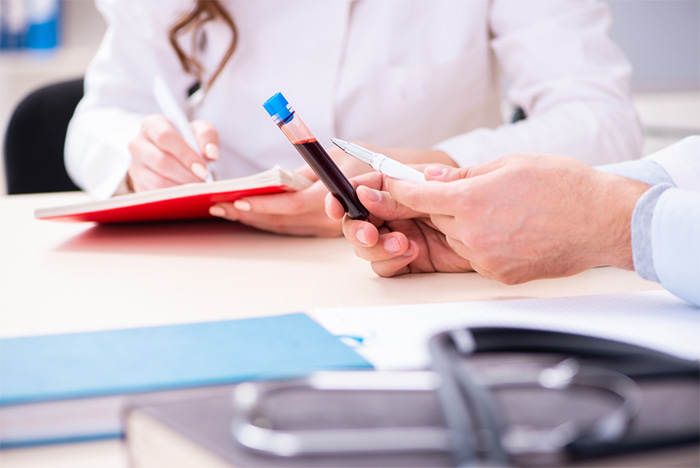 How long does it take to become a phlebotomist?

Most phlebotomy training courses take one to two semesters, which works out to between four and eight months. Research what programs are available in your area to find out which ones will work best with your schedule and current employment.

Where do phlebotomists work?

Phlebotomists work in a variety of environments and can be found wherever blood draws are needed. Some work environments for phlebotomists include hospitals, medical and diagnostic laboratories, ambulatory healthcare services, physicians’ offices and outpatient care centers.

While many phlebotomists do work in stationary offices, some also travel to different offices and sites in order to set up mobile donation centers. Sometimes they may also make visits to long-term care centers (such as senior living facilities) or to patients’ houses in order to take blood draws. Most phlebotomists do work full-time. Some of them may work nights and/or weekends, especially if they work at a hospital or other facility that stays open around the clock.

How much do phlebotomists make?

According to the Bureau of Labor Statistics, in May 2019, the median annual wage for phlebotomists was $35,510. (BLS defines median wage as “the wage at which half the workers in an occupation earned more than that amount and half earned less.”) The lowest 10 percent of phlebotomists earned less than $26,000, and the highest 10 percent earned more than $49,750. Median salaries varied somewhat by workplace. The figures below show the breakdown:

The job outlook is good for phlebotomists. Employment is projected to grow 23 percent from 2018 to 2028, much faster than the five percent average for all occupations. Blood analysis is an essential function of healthcare and will continue to remain vital as the demand for medical care grows and the population ages.

What skills are important for phlebotomists?

To be a successful phlebotomist, you need to have several different personal characteristics. First of all, phlebotomists must be compassionate and have great people skills. They interact a lot with patients, many of whom are nervous about getting their blood drawn. Phlebotomists need to be able to explain the process clearly in a way that reassures the patient. They must also be very dexterous and have great hand-eye coordination so they can quickly find a vein and stick it with the first try. They must also show good attention to detail, as accuracy is essential when taking blood samples and recording the corresponding information in databases. Finally, they must have good physical stamina, as they often spend all day on their feet. 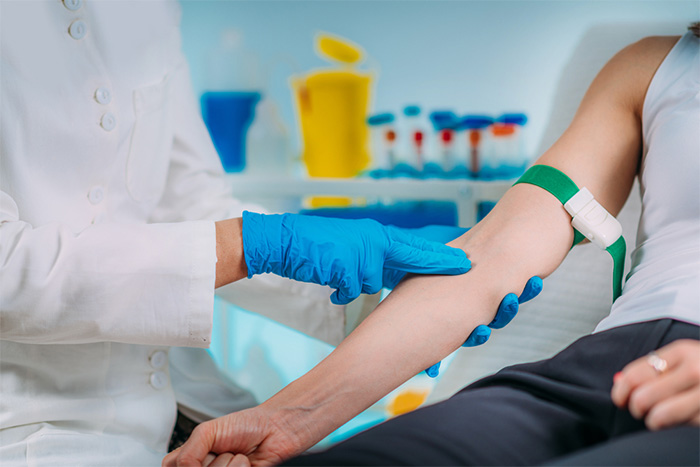 What does “phlebotomy” mean?

“Phlebotomy” isn’t just fun to say. It’s been used to refer to bloodletting since the 14th century. The word comes from the Middle English fleobotomie, which came from the Middle French flebothomie, which came from the Late Latin phlebotomia. The Latin word came from Greek roots–phleb- (meaning “vein”) and + -tomia (meaning “cutting”). In case you were wondering, the word “blood” was originally Germanic in origin (not Greek), which is why “phlebotomy” doesn’t sound anything like the word blood, even though it directly refers to bloodletting.

What is the history of phlebotomy?

Phlebotomy is a medical technique that has been used since at least the ancient Greeks. It was used before for ritual religious practices and to rid the body of evil, but the Greeks were the first ones to theorize that blood also had an impact on physical health. Hippocrates devised a system of four humors that were each connected to specific bodily systems.

Diseases could be corrected by tweaking the levels of humors through bloodletting and other practices. A physician named Galen was the first to discover that not just veins but also arteries pump blood around the body (previously, it was believed that arteries carried air, not blood). This further refined the practice of bloodletting.

Bloodletting continued to be used as something of a cure-all through the medieval period and beyond. Many different people performed bloodletting, not just doctors. Even clergymen sometimes bled patients. However, Pope Alexander III prohibited clergymen from performing these bloodlettings in 1163. Barbers, who already worked with sharp objects, stepped in to fill the void. This is the origin of the classic red-and-white striped barber poles, with the red representing blood and the white representing bandages.

Pilgrims brought the practice over to America in the 1700s. While knives continued to be used for the procedures, some practitioners also turned to leeches as well. Oftentimes, blood would be removed from the patient in large quantities until they passed out. President George Washington is perhaps the most famous American victim of bloodletting. He became ill after riding around his estate in bad weather, and his doctors bled him four times before he passed away.

Thankfully, phlebotomy came to replace bloodletting as the medical field continued to develop. In modern times, blood draws are much less invasive and require a much smaller sample to be taken. Blood draws are also used in very specific circumstances instead of being treated as a cure-all, much to the relief of both patients and phlebotomists.

What tools do phlebotomists use?

Phlebotomists use several different kinds of clinical supplies to quickly and easily perform blood draws. FDA Cleared PPE (personal protective equipment) is essential to keep both the phlebotomist and the patient safe. Phlebotomy specific equipment includes tourniquets, lancets, butterfly needles and Evacuated Collection Tubes (ECT) to store the blood. They also use alcohol pads to clean the injection site and bandages to cover it afterwards. Like most other medical professionals, they wear stretch scrubs to work (or Disney scrubs, if they work in pediatrics). 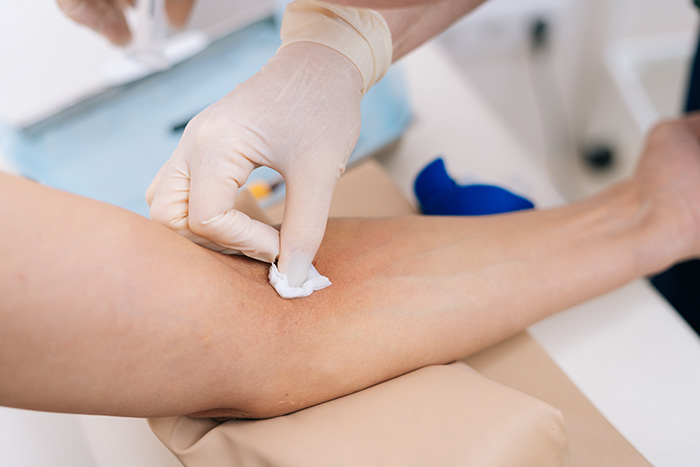 How do phlebotomists draw blood today?

If you’re wondering how to draw blood, we’ve already put together a guide about that very topic! In it, we’ll walk you through how to find a vein, the complete list of equipment you need and how to actually perform the blood draw itself.

What is the purpose of blood draws?

Blood draws are the first step of blood tests. There are many different types of blood tests that have different purposes. In general, they are used to check for the presence of certain conditions or to determine whether or not your organs or a medical treatment is working. Some of the most common blood tests are a complete blood count (CBC), blood chemistry tests, blood enzyme tests and blood tests to assess heart disease risk. There are too many blood tests to go into detail here. The National Heart, Lung and Blood Institute offers a good beginner’s guide to familiarize you with the basics. Many blood tests don’t require any preparation, though some require fasting (not eating any food) for eight to 12 hours before the test. For the patient, blood draws are very low risk as long as equipment is sanitized; otherwise, they run the risk of potentially contracting something. The most common risks are discomfort and bruising at the site of the venipuncture, both of which go away quickly.

How is a phlebotomist different from a lab technician?

You might sometimes see phlebotomists mentioned alongside laboratory technologists and technicians. While there is some overlap between these positions, being a laboratory technologist is a distinct job. Lab technicians may take samples of all kinds of bodily fluid, including blood but not limited to it. They also have the training necessary to perform tests on the samples themselves, which phlebotomists do not have. Phlebotomists only take the blood samples and then pass them off to labs for further testing. Lab technicians and technologists usually make higher salaries than phlebotomists, but they must also complete between two to four years of school before beginning work, so there are tradeoffs.

Phlebotomy is a vital practice, and it can be a fulfilling career path for people who have a strong stomach and deft hands. We hope this answers all your questions about becoming a phlebotomist—and if you’re in the market for scrubs, click below to check out the most popular styles from top brands!

Stock up on Scrubs! 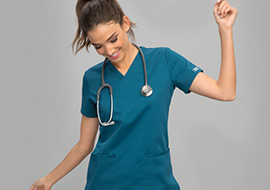 Stretch scrubs flex and move with you during a long shift on your feet. But with so many options out there, which brand should you go with? Discover our customers’ eight favorite stretch scrubs collections, including Cherokee, Dickies and Jockey. 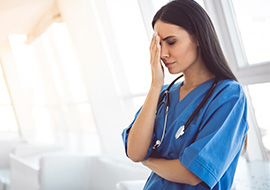 Nurses are at a very high risk for occupational injuries, many of them caused by incorrectly lifting patients and other loads. Discover seven best practices to keep yourself and your patients safe–from using gait belts to wearing non-slip shoes.

Becoming a registered nurse is only the first step. Discover the many nursing career paths you can take in this comprehensive guide. 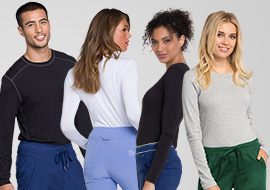 Choosing scrub pants that look and feel great can be a chore—but it doesn’t have to be. Read our handy guide and discover the six steps to choosing the perfect women’s uniform pants for your job.